When I was given the task to organize an outdoor party for my nephew, I went on to search for the best outdoor games that the guests can play with. That’s when I came across the inflatable soccer dart boards. With my 7-year old nephew’s playful nature, I’m pretty sure it’s something that he will love to share with his friends at his birthday party. This sports equipment consists of an inflatable dartboard along with some soccer balls. To play this game, guests need to hit targets on the dartboard with the use of the soccer balls. It’s such a unique way to entertain party guests and something that the celebrant will surely love to play. 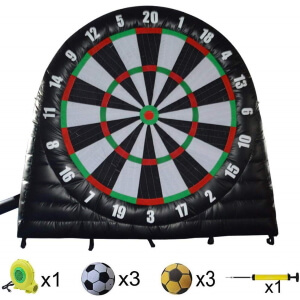 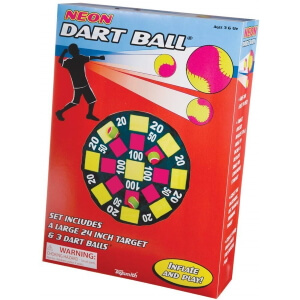 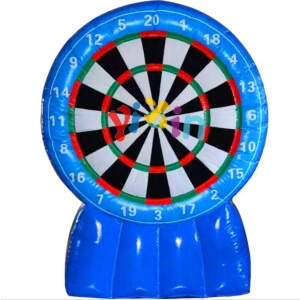 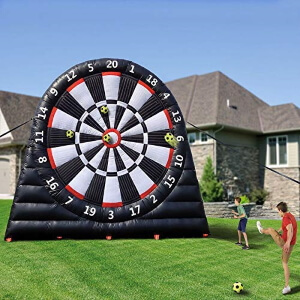 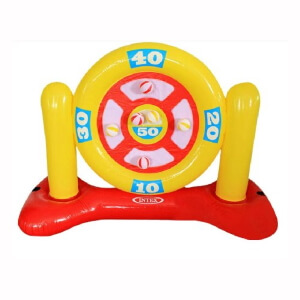 The inflatable dart board is becoming more and more popular these days and you’ll find several different types of them in the market with varying sizes. There are small-sized boards and there are also gigantic ones. Just like playing a real dart game, players need to hit the target on the board from afar. But instead of using real darts, soccer balls are used instead. Since the ball doesn’t have that pointy sharp edge that hits the surface of the board just like in a real dart game, the inflatable dartboard has a sticky material that will hold the ball that’s being thrown to it. Just like me, you’ll probably be overwhelmed with the numerous choices of inflatable soccer dart boards online so I came up with a list of the best ones to narrow down your search. But before I talk about each of them, let’s first find out more about this product so you’d be able to make the best decision. 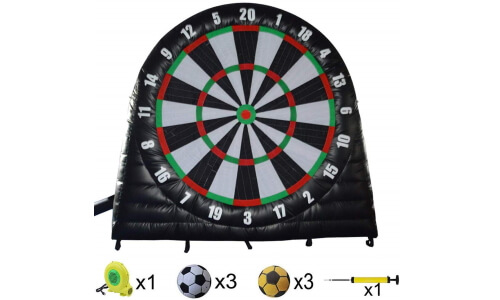 This dart board is my top choice, mainly because it’s what I’ve bought and I am satisfied with the product. It’s 10×10 feet in size, which is exactly what I need. Above all, it’s made from high-quality PVC, which is truly suitable for outdoor use. I also love the fact that the material is waterproof so even if I leave it outside during the rainy season, I won’t have to worry about it getting worn out. In fact, we left the dart board outside after the party was over for a few weeks but it remained in good condition, despite the heat and the rain. So when it comes to durability, I am confident that this product will not disappoint.

When you purchase this product, you’ll get a package that includes the dart board, sticky soccer balls, secure tools, and a sandbag which helps the board to stay secure even during windy days. There’s also an air blower and a rope, which is required for inflating.

Toysmith Get Outside GO! 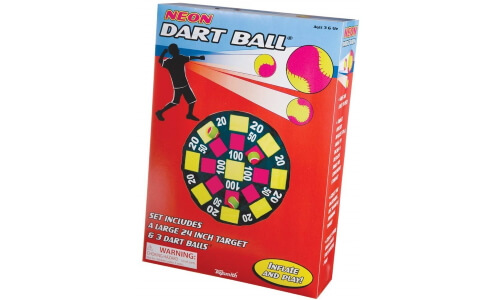 I’ve also checked out other dart boards that I believe would be a great fit and I came across the Toysmith Neon Dart Ball Set. This dart board is perfect for kids of all ages. So if you’re a parent and you need something to keep your kids occupied during their free time, this is one of the toys that I would recommend. This is totally safe and will not put your kids in danger. Thus, you can go on with your tasks without having to worry about your little ones.

When it comes to durability, you’ll not be disappointed with this product at all. It’s made from high-quality materials that can withstand daily use. Plus, this inflation board is very easy to mount. It will only take a few minutes to install, which is great if you’ve got very excited kids! The board’s size is 24 inches, which is spacious enough for the kids to easily aim a hit. With this product, you’ll get three balls along with the dart board. 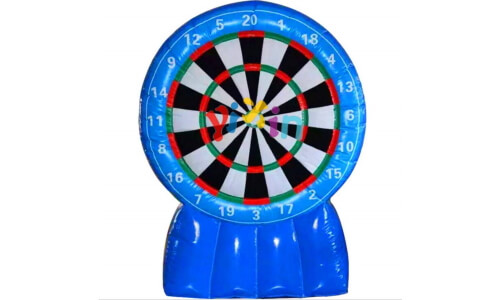 Another giant inflatable dart board that I would recommend is the KUNHEWUHUA 7.8 ft. giant inflatable board. It has a spacious target board and the design is patterned from a traditional dart board. If you’re a big fan of the dart game, you’ll absolutely love playing this game with your kids. This toy is suitable for kids, teens, and adults too. Thus, it’s also a great choice if you’re hosting an outdoor party.

I love the fact that this product is made from high-quality materials, which is why I have included it on this list. It’s made of PVC that can withstand the harsh weather conditions outdoors. With each package that you buy, you’ll also get safety tools that can help to ensure that the inflatable dart board will stay secure even when it’s windy. There’s also an air blower included and six balls. 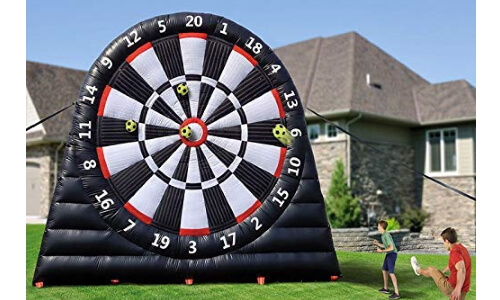 This is another soccer dart board that I like, except that it’s not really suitable for young kids who don’t have enough power to kick the ball hard. It can only work for teens and adults who are strong enough to kick the balls hard and hit the target.

This soccer dart ball is massive. You get to choose from the 10×10 feet size up to a whopping 18×18 feet! In fact, this board can be a perfect tool for practising your soccer skills as well. If you’re fond of soccer, then you’ll surely love this game. Just like with the other soccer dart boards, the target area is patterned from a real dart board. Aside from playing soccer in it, others use it in playing cricket and other games. Indeed, this soccer dart board is very versatile and it’s a perfect way to entertain friends and family over get together parties!

This dart board package includes a blower, which you can use to inflate the board fast. There are also six balls in the package. 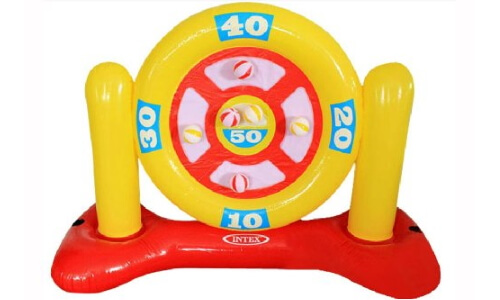 Another inflatable dart board that I’ve added on this list is the OOFAY Inflatable dartboard, which I would recommend for those who need something that they can use in the water. Also, if you want to bring the board with you on your trip, then you’ll love the fact that this inflatable board is very portable.

Ideal for kids of all ages, this inflatable dart board is made from high-quality materials that are not toxic. Thus, it’s safe for the kids to use. The company behind the product claims that this product has undergone rigorous testing for durability and they guarantee that this will last for a long time.

What is Soccer Dart? 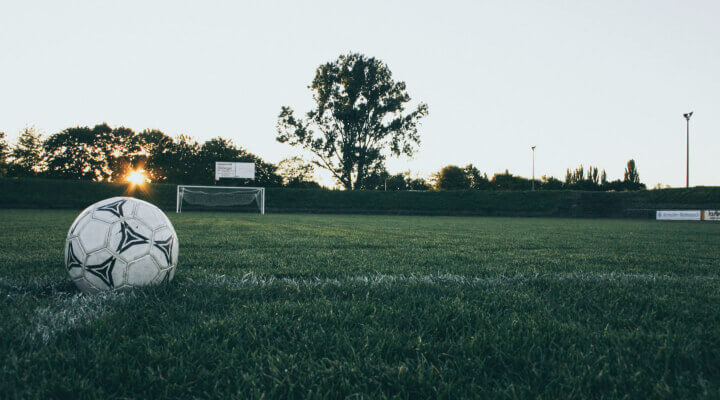 The soccer dart game originates from the real dart game where a player has to aim at a target board from afar. In the soccer dart, balls are used instead of darts. And instead of using your hand to throw the dart, you’ll have to kick the soccer ball in this game, which is why it’s sometimes called the foot dart game. The game requires two players or teams. It’s a truly exciting game and is very tricky and somewhat physically challenging. Whoever is the first to score ten goals will be declared the winner. Just like with the real dart game, the rules of the soccer dart game are pretty simple. The player whose ball will stick close to the bull’s eye is the first to make a hit. In order to score a goal, the player must take possession of the soccer ball, which is to hit the bull’s eye. Once you have taken possession of the ball, you need to keep it until your opponent takes it back from you by hitting the bull’s eye.

Whoever is the team or player that will be able to take possession of the ball will be allowed to score a goal. To score, players must hit any of the double fields that are on the dartboard. Double fields refer to that thin ring on the board and the inner bull’s eye-ring. There are no strategies to follow in this game. All you basically need to do is to grab the soccer ball, aim and kick it towards your intended target in the dartboard.

Now that I’ve shared some details about this game, it’s time to talk about the different soccer dartboards to buy. There are many reasons why people may need to purchase inflatable dartboards. In my case, I needed it for entertainment at the birthday party of my nephew. I wanted to give the guests a unique way of entertainment, something that they have not played before for a more enjoyable and exciting experience. As I’ve already mentioned, these boards are available in different sizes, from the small ones to the gigantic boards! Since I want all guests to be able to participate in the game, I’ve opted for the gigantic version. The small ones are more suitable for small kids.

Aside from the size, there are other factors that you need to think of when buying an inflatable dartboard. Of course, durability is important. I definitely don’t want to spoil the fun by buying something of low quality that will get damaged after only a few kicks. It’s very important that the target is made from a high-quality material that can handle the pressure applied to it from the balls that are being kicked. Also, since it makes use of a sticky material to hold the ball, then you need to choose something that uses a sticky material that’s capable of holding the balls well. The price of the soccer dartboards will greatly vary depending on the size, design, materials etc. Obviously, the bigger ones are more expensive than the smaller versions. 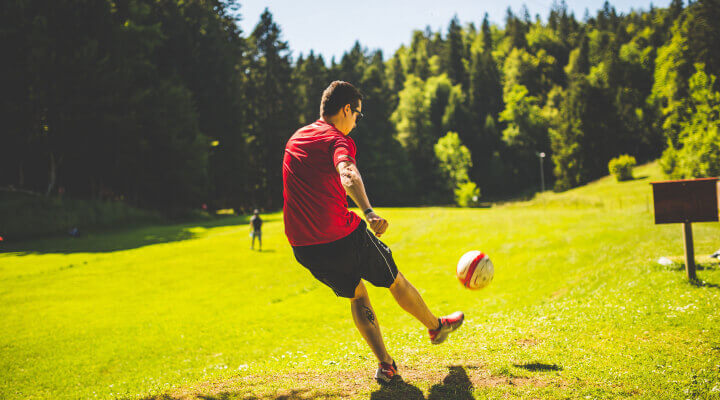 The material plays an important factor in the overall durability of the dart board. Most of these inflatable boards are made of reinforced Oxford or Velcro material and PVC. Again, choose something where the surface is sticky enough to grip the ball that’s kicked towards it. I opted for the board that’s made of high-quality PVC because I believe it’s perfect for outdoor use. But I find that the Velcro and Oxford ones are also popular as well.

Here is a video of two misters playing the foot darts game. Take a look at how they enjoy!

Now that I’ve provided a list of the best soccer dart boards in the market, it should now be easy for you to shop for the best dart board. But you must also consider your needs when buying one. If you need it for your small kids to play with, the small inflatable dart boards will do. However, if you’re hosting outdoor parties like me, then I would suggest getting a gigantic one, which you can install outdoors. Sure, they might cost more than the small ones but they are definitely worth investing in. In fact, I plan on offering the board for rent so I can at least get back the money I spent on it.